The head of the PTC Holding group of companies announced his intention to open a branch in China. According to him, this will allow the Kazakh company to work directly with shippers from China, using the capabilities of the transshipment terminal at Dostyk station 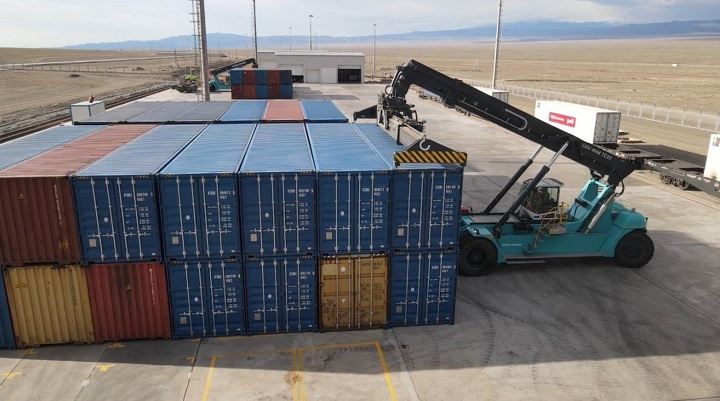 PTC Holding: from rolling stock to own terminals
PTC Holding is a diversified international dynamically developing group of companies, which in Central Asia is a major owner and operator of various railway rolling stock and infrastructure. The holding carries out cargo transportation in the direction of Belarus, Georgia, Russia, Kyrgyzstan, Uzbekistan, Turkmenistan, Tajikistan, Afghanistan, China, Ukraine, Mongolia, Azerbaijan and the European Union. And, of course, it works in the domestic Kazakhstan market. Last year, the volume of transportation of this company amounted to 14.1 million tons, this result was achieved both at the expense of its own fleet of rolling stock (more than 11.8 thousand units) and at the expense of the operating fleet (more than 14 thousand cars).

Over the past three years, the Company has been investing significantly in the development of transit container transportation by expanding the existing railway infrastructure and increasing the fleet of fitting platforms in synergy with NC KTZ’s plans to increase cargo traffic along international corridors passing through Kazakhstan.

The infrastructure component of PTC Holding was replenished last summer with a multifunctional cargo handling terminal at the Dostyk station with a design capacity of 160 thousand tons. DFE (twenty-foot equivalent) per year. And already in the summer of this year, the second stage of the project was put into operation at this Dostyk TransTerminal site, which doubled the terminal’s capacity by half, to 320 thousand. DFE per year. This platform allows for several hours to reload containers that arrived at the station in trains on a narrow gauge of 1435 mm from China into trains on a wide (1520 mm) Kazakh gauge – and in the opposite direction.

“According to the results of this year, PTC Cargo, a subsidiary of PTC Holding, which is the operator of the new terminal, plans to transfer about 160 thousand containers to the TEU via Dostyk TransTerminal, which is about 15% of the annual container cargo flow through Kazakhstan, and is ready to increase these volumes,” says the head of PTC Holding. 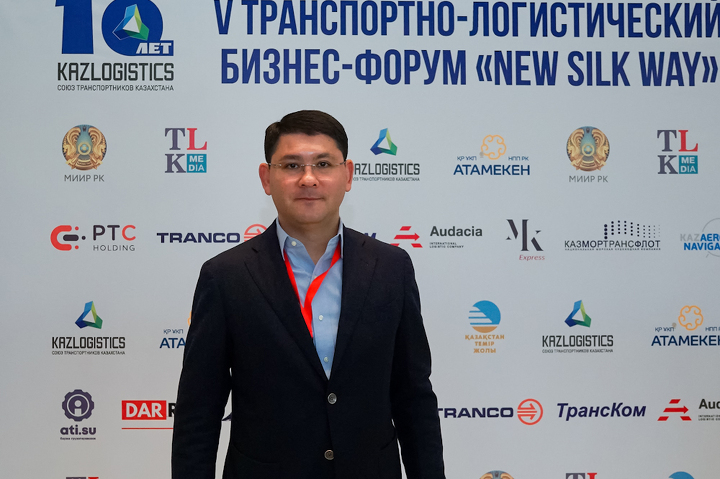 One of the technical advantages of the terminal is the necessary length of the receiving and sending path for reloading, which allows transshipment from one train directly to another, without crushing trains into parts, as often happens at many terminals, says Timur Karabayev.

“Before the opening of our terminal, any train coming from China was divided into two or even three parts, they were fed to different places, which affected the speed of transshipment, and this factor is key for the successful operation of transshipment facilities. Therefore, our ability to process the whole train that came on a narrow gauge and also load the whole train on a wide gauge is one of the competitive advantages. We can form mono trains by loading containers from several incoming trains to one going in a certain direction – this allows us to make a platform for the one-time storage of 1200 containers. Well, our main advantage is the end–to-end cargo handling technology,” Timur Karabayev shared.

When the “draft” at the station becomes an advantage
In 2021, having built the first stage of the terminal, PTC Holding quickly became convinced that the main factor constraining rapid overloading is the binding of all terminals operating at Dostyk to one railway track of this station. Since the Dostyk – Alashankou international crossing serves not only container transportation, but also transportation by universal rolling stock, “traffic jams” may occur on the tracks, delaying the departure of trains in the direction of Europe and Russia. In this regard, the investor, who invested 6.1 billion tenge in the construction of the first stage of the terminal and 9.2 billion tenge in the construction of the second stage, saw the need to apply end–to-end technology at Dostyk TransTerminal. This method is provided by the presence of its own access roads that have access to the trunk road, but allow you to supply trains for unloading and loading independently from the highway. Therefore, in parallel with the construction of the second stage, the installation of a new railway crossing of receiving and sending tracks with a length of about 13 kilometers was carried out, which was put into operation.

“Now both the entrance of loaded wagons on the narrow–gauge railway from the Chinese side, and the exit on the broad gauge goes through the Dostyk station, not only containers go there, but also universal rolling stock, so there is no point in doing a quick overload there,” says Timur Karabaev. – Cars still risk getting stuck at the departure station. This is where the understanding came that it is necessary to make end-to-end technology through the construction of its own access roads in order to increase the speed of overload. We have built these paths, thanks to this infrastructure, the entire section has become more passable, the speed on it is higher.”

Who has already become a client of Dostyk TransTerminal
All these advantages of the new terminal attracted the attention of many international and foreign companies to it: during the year, the largest amount of cargo through it (115 thousand TEU) was handled according to the projects of the EPA – Eurasian Railway Alliance of Kazakhstan, Russian and Belarusian Railways. Own projects of PTC Cargo, a subsidiary of PTC Holding, which manages the terminal, provided transshipment of another 14 thousand TEU. The geography of PTC Cargo’s own projects, implemented in partnership with the Russian companies Transcontainer and Logbox, is quite diverse: 9.4 thousand TEU were sent to the Moscow railway hub during the year, 3.1 thousand TEU were sent to Europe, 1.3 thousand TEU to Uzbekistan, and 0.2 thousand more. The DFE was made up of Kazakhstani goods shipped by containers during this year for import. At the same time, private companies are showing increasing interest in the possibilities of the Kazakhstan terminal.

“If earlier 12-14 trains a day passed through Dostyk station, now 16-18 trains can go through it, of which about nine are container trains, the rest is a universal fleet. Cargo traffic will constantly increase: now China is already beginning to increase shipments through our joints, they already see that Dostyk can accept more trains, and they are starting to send a lot to Europe and Russia through this station. Because everyone wants to deliver their goods quickly. And now the cargo that we ship to Europe and to Russia, taking into account the moment the containers leave from the easternmost point of China, reaches, for example, Moscow in 12 days – this is very fast. That’s why customers choose the railway, and our terminal can become an important and correct component of this choice,” he concludes.

“What is important, for the national company “Kazakhstan Temir Zholy” this is an additional income. As part of the technical conditions, a siding was built, and we transfer this siding free of charge to the balance of the KTZ itself. Any station that is located on the KTZ network is a tariff station, that is, KTZ tariffs apply to it. If earlier there were a hundred units of containers, or a thousand units, or a hundred thousand, now there will be an increase of 10-20%. And, accordingly, the railway charges from transit, import and export will be more,” says Timur Karabayev.

Now, according to Timur Karabayev, they managed to unload the Dostyk station itself due to a new crossing. The new railway infrastructure harmoniously fit into the plans of the national company and the state. As you know, there is now a Dostyk – Moynty section with a length of 830 km, where KTZ is conducting a large project to expand the capacity. It is assumed that this section will be actively developed due to the growth of transit cargo traffic from China to Europe and in the opposite direction. Projects such as Dostyk TransTerminal are an example of the right synergy of public and private investment in the development of logistics infrastructure. 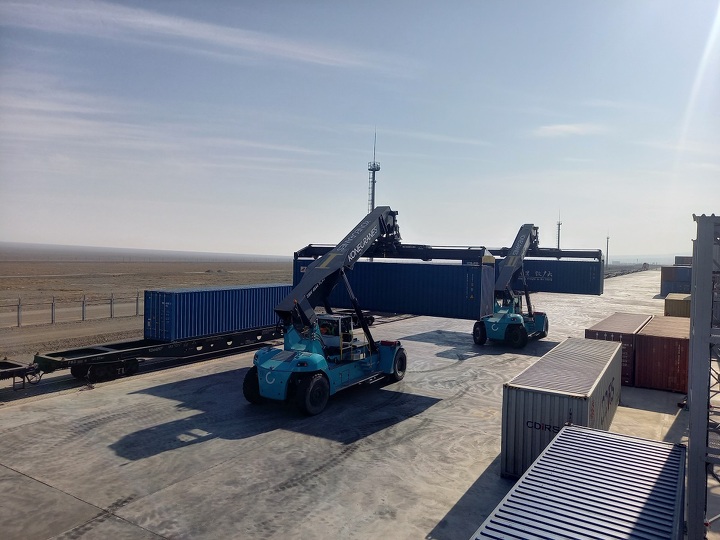 Trans-Caspian International Transport Route
Over the past year, logistics in the world has changed dramatically. China and Kazakhstan are actively working to create a highly efficient and convenient multimodal transport artery in Eurasia. This is true, and the transit of freight trains in the direction of China – Europe established on the territory of Kazakhstan plays a significant role in ensuring the continuity of global supply chains and production. PTC Holding is ready to offer the organization of transportation of any complexity through its own facilities and its agents and partners, to find a flexible and universal solution for each client. Including the TMTM route.

TMTM is a Trans–Caspian international transport route that goes from China to Kazakhstan, the Caspian Sea, Azerbaijan, Georgia and further to Turkey and European countries. For 9 months of 2022, the volume of traffic by TMTM increased 2.7 times compared to the period last year, reaching 1 million 84 thousand tons of cargo. Members of the TMTM Association are 20 companies, including railway administrations, ports, shipping and logistics companies from 8 countries.

“Our trans-Caspian corridor is becoming relevant and attractive for China. We have already sent an official letter to the Association of the Trans-Caspian International Transport Route about the inclusion of transportation from the Dostyk station in the TMTM route. This will create additional opportunities for Chinese shippers to transport goods to Europe,” concluded the head of PTC Holding.